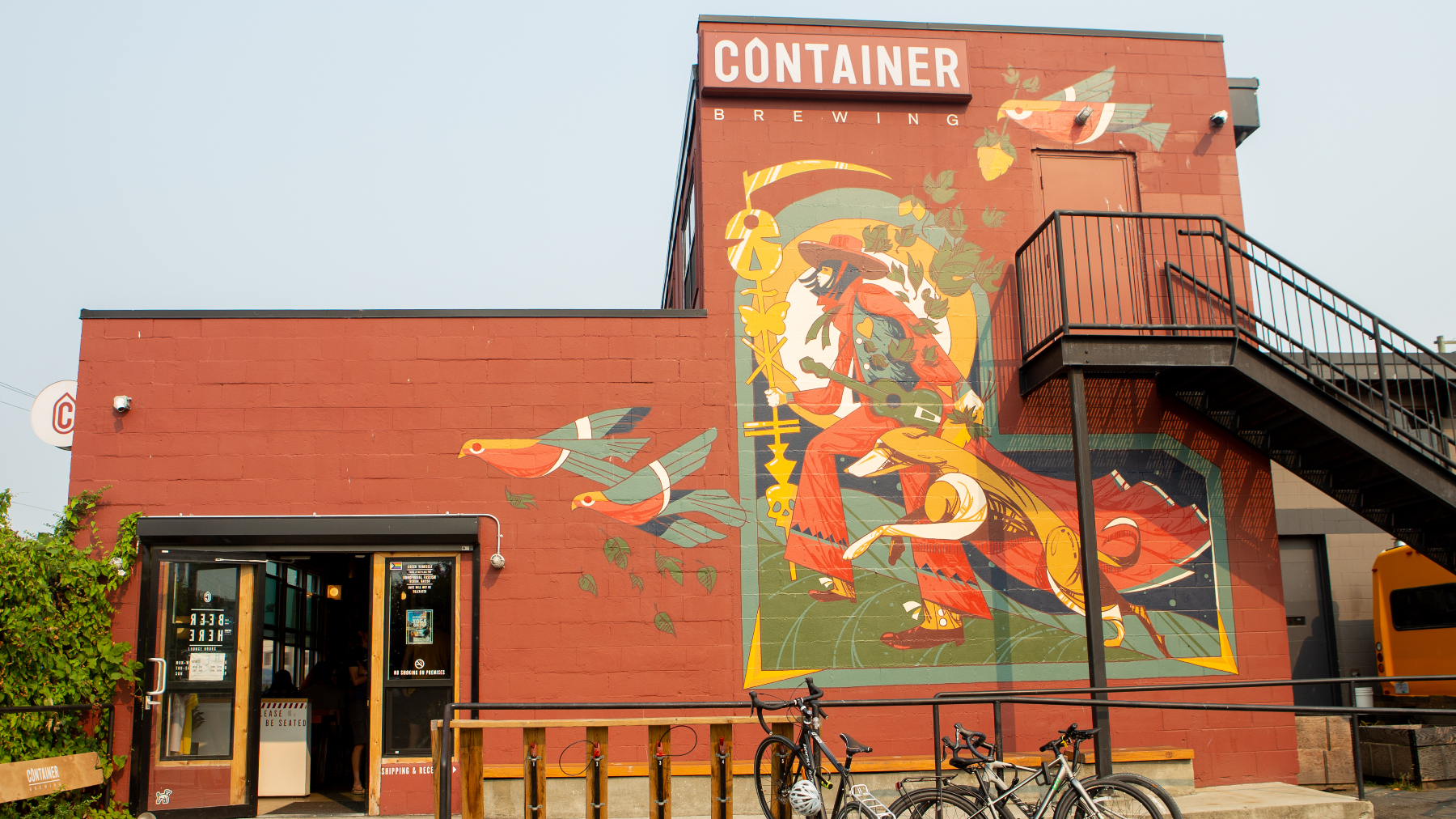 In the lead up to this year’s AGM we are sharing a series of reports with our business community on all that we’ve been up to in service to you, our members. Next up, COVID-19 Recovery and Placemaking.

The effects of the COVID-19 pandemic continue to challenge our members and the community in diverse and extensive ways. Supporting our members through these challenging times has been the top priority for the Strathcona BIA. The Board has been working to apply a COVID-19 recovery lens to all board decisions and ensure that our programming and services support members through COVID-19 and facilitate recovery efforts. We have also continued to invest in placemaking initiatives in Strathcona to attract people to the area and bring new vibrant spaces that inspire and connect people.

At the beginning of the pandemic we were the first BIA to join the COVID-19 Community-Coordinated Response Network, over 40 organizations operating in the Downtown Eastside working together to address the impacts of COVID-19. This group continues to meet and collaborate on ways to support the well-being of the community, expanding their scope of work to address other challenges such as heat wave weather events and the opioid crisis. Showing up as a community partner and building relationships with groups in the community who are working to create a thriving neighbourhood is integral to our success as an organization.

We’ve increased our direct member communications through COVID-19. We continue providing resources and information on available COVID-19 resources and business supports through our e-newsletter channel and social media channels. When new targeted grants came online to help hard-hit businesses or when new health order regulations were announced, we were quick to share about them with our members immediately, and we’ll continue to do so as long as the pandemic is impacting you and your operations.

We launched a COVID-19 Recovery Grant pilot program in September 2020 to support our business and property owners affected by the pandemic. Matching grants up to $1000 were used to help members manage unexpected expenses from COVID-19, attract customers, improve security, and invest in placemaking improvements. We were excited to award $15,620 to 22 Strathcona BIA members across multiple sectors and different sub-districts, for projects ranging from patio installations, to security fence upgrades, to bulk PPE supplies. The matching grants were put towards projects that resulted in a total investment of almost $50,000 in area improvements and recovery supplies.

Building on the success of the Recovery Grant, in July of this year we launched the Safe and Welcoming Grant. We heard from members in our Safety Survey earlier in the year that more investment in environmental safety is a priority. Specifically, many members felt that improvements in things like lighting, street and crosswalk infrastructure, and more green space will have a large impact on the overall safety of the area. We took the learnings from the COVID-19 Recovery Grant pilot program and created this new grant program to provide members with the funding and flexibility to address their specific needs while also keeping a district-wide perspective. The goal of this program is to help our members make safety and beautification investments that will attract people to the area and create a more safe and welcoming community for all – small changes add up to big impact! Since the launch of the program, seven businesses have applied and are in the process of starting on safety and beautification projects. Applications continue to be accepted here. 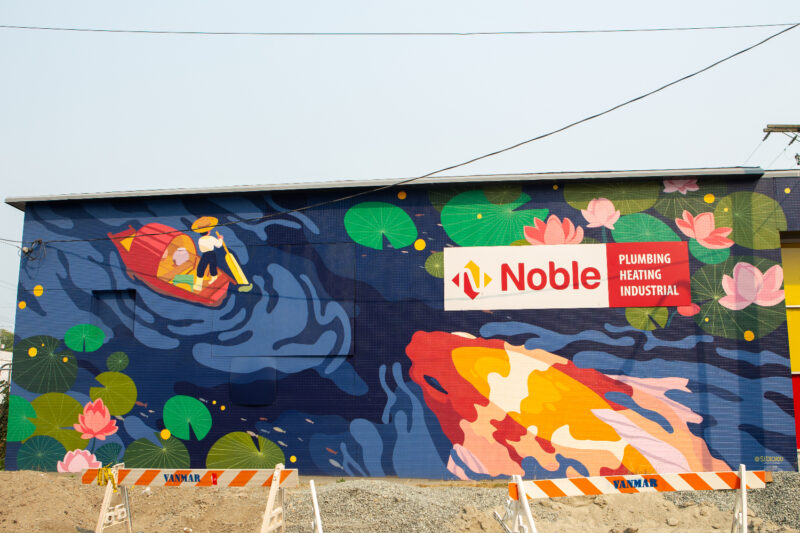 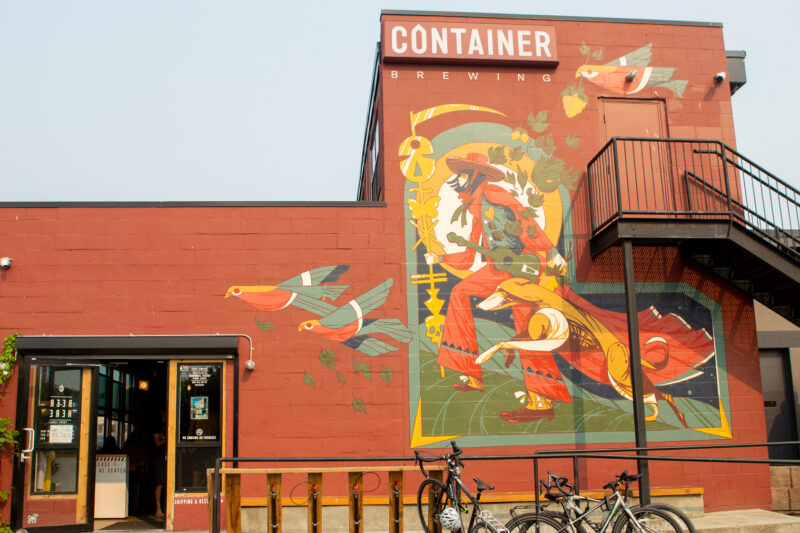 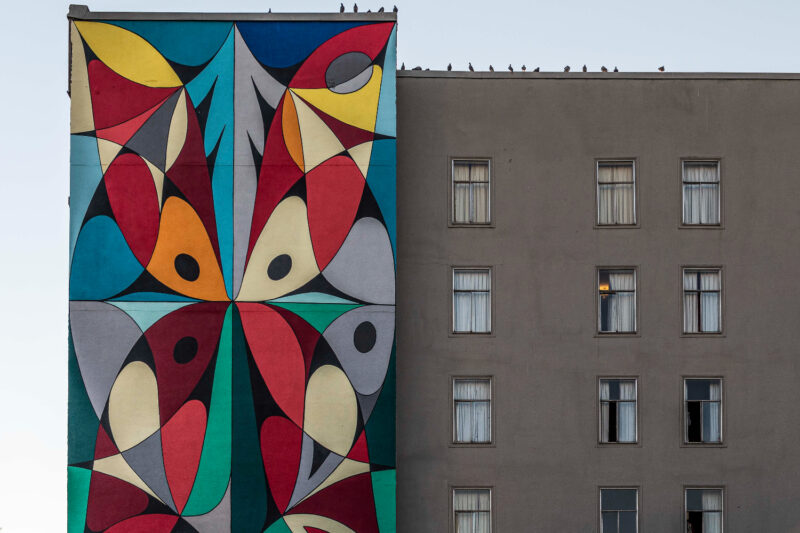 We’re excited to have brought several new murals to the Strathcona neighbourhood this year in partnership with Vancouver Mural Festival and local property owners. Artist Sitji Chou created a mural piece called Ripple at Noble on 1001 Venables Street. The artist hopes the waves, lilies, and koi mingling in between will instill a sense of tranquility and whimsy to all who see the mural. Another piece includes Benjamin Stone’s bold new work at Container Brewing, titled No Arrival. A third mural at 603 Powell Street is part of the Black Strathcona Resurgence Project (BSRP). The BSRP is a project to reclaim Black visibility in Strathcona, an area historically populated by Vancouver’s Black community. The BSRP mural titled Watch Over this Child by artist Sasha Mbabazi, is a call to action to take responsibility for the wellbeing of each other. And the Thomas Cannell mural Give It Time, that we sponsored in 2020, has become a standout mural in the district and an East Hastings landmark. Public art has the power to help strengthen the connections between all who share space here, and we are so proud to be a part of supporting more murals for all to enjoy.

We have also invested in mural restoration and upkeep. Last year, we repaired and refreshed the mural at 812 East Cordova, an amazing colourful mural depicting the Squamish Valley and Stawamus Chief Mountain, among others, and we remain invested in ensuring murals in Strathcona are well maintained.

The Hastings Urban Tree Planters are an urban greening initiative going since 2014 that responds to the lack of trees along some of the streets in Strathcona. The tree planters bring life to our streetscapes by adding greenery through resilient tree varieties and colour through vibrant murals on the planter exteriors. Over the years, the planters have provided a platform for many emerging artists, and this year we are honoured to dedicate this visual space for an Indigenous artist to create a statement-making impact along East Hastings. Following a selection process with Vancouver Mural Fest, we’re excited that the planter murals are in the process of being refreshed by artist Zac George. The design, selected in part through consultation with participants in the planter program, is called Sacred Mountains and we can’t wait to see it completed soon. We’ll also be adding four new planters to the 800 Block of East Hastings, expanding the total number of tree planters in the community to 16. 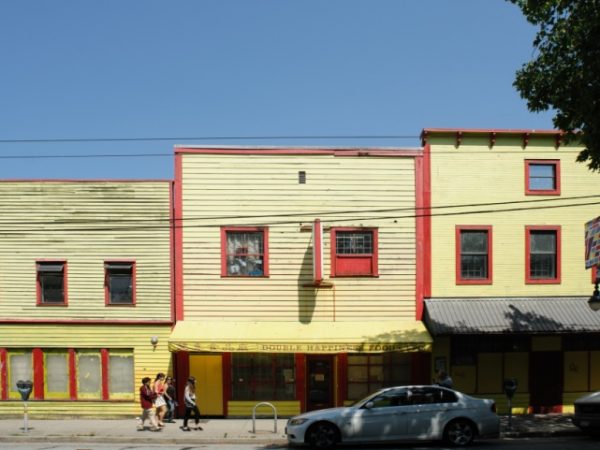